The Power of a Handwritten Thank You Note in Business 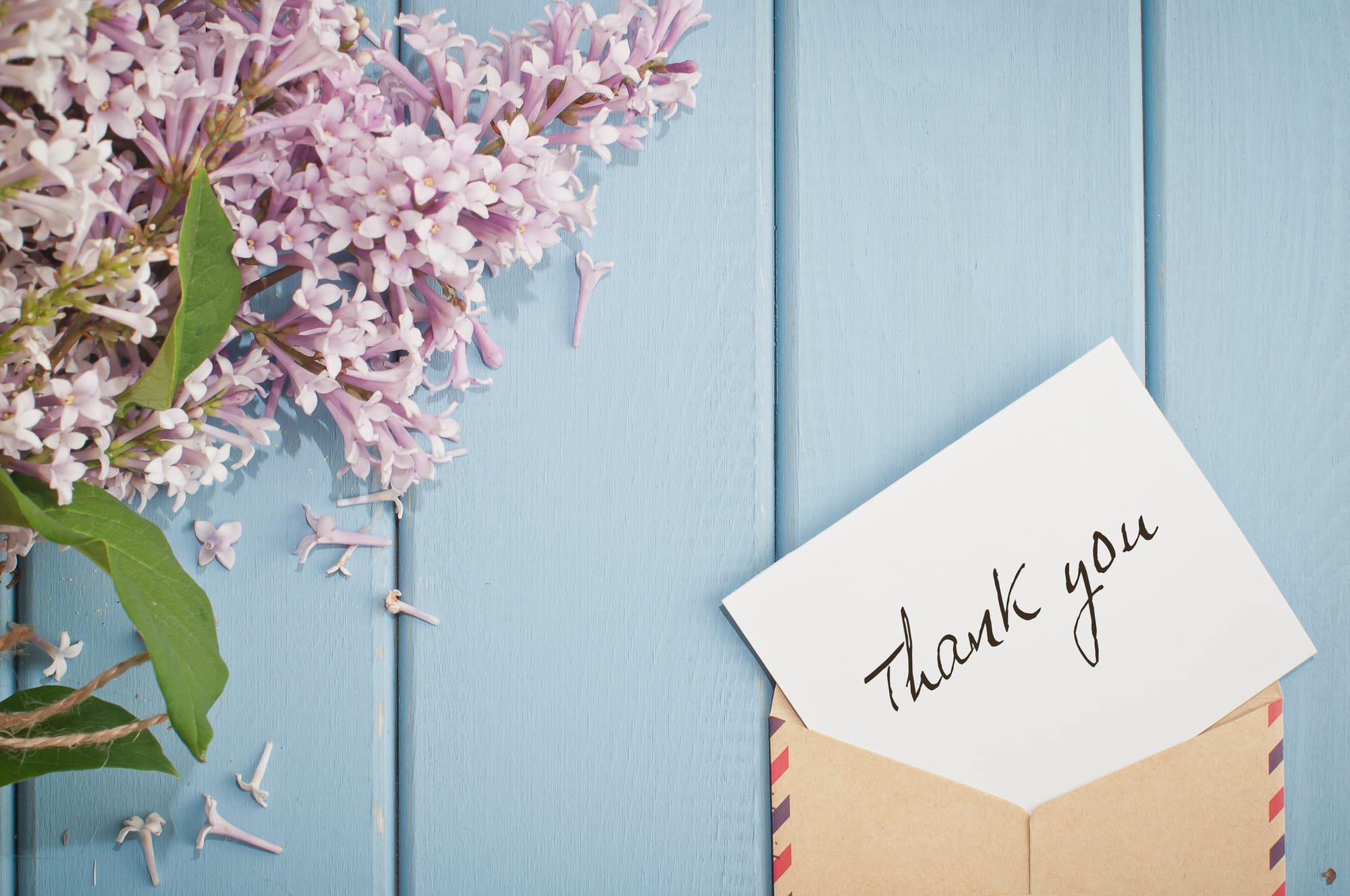 If you have (or had) a mom like I did, you are well aware of the power of a thank you note. From a young age, it was ingrained in me that thank you notes were not optional if I had received a gift. The guilt would set in, thanks to my mom's constant reminders, as soon as I opened the gift until the note was in the mail. Apparently, Jimmy Fallon’s mom taught him the same lesson. I am grateful for this because if my kids ever forget what I taught them, Jimmy’s comedy routine of writing weekly handwritten thank you notes on The Late Show will be a good reminder.

The principle of showing gratitude is true in business as well. Why bother with a handwritten note in business when we can easily send an email? Here are a few reasons to consider and hopefully, inspire you:

1.  To honor the person who took the time to do something beneficial for you.

Whether it be an informational interview, a referral, a piece of advice, or an actual job interview, writing a note of thanks shows the person honor. These acts all involve someone else’s time, talents, energy and good will. It is right and good to show honor and respect to those who show us that kind of deference. Ideally, your note reflects a genuine sense of gratitude – so much so that even if you don’t get the job, for instance, it should still be sent. But even if you are just going through the motions of doing what is right without the “feeling,” it is better to do so than not. Giving honor to someone else has a way of reinforcing the good in them and spurs them on in their efforts to go the extra effort for others – in business as well as day-to-day life.

2.  To stand out from your competition.

Often an employer or recruiter may have two top candidates equally qualified and it comes down to cultural fit or chemistry. Imagine the decision maker wrestling with whom to give the offer to and in comes a stamped, handwritten thank you note delivered to his/her inbox. While this may not be the deciding factor, it actually could be!  And, even if it does not mean you get the job, it makes an impact on your reputation as someone who has class and took the time to take this extra step in the process. It also reflects your character and your interest in not only the job, but the people who work there. Personally, as a volunteer career coach to college students and in my former executive recruiting role, I can say that it made a difference in how I viewed the person and my motivation to go the extra mile for them in the future.

3.  To bring a bit of old fashioned pen to paper goodness into a fast-paced world of digital Calibri 12 point font keystrokes.

The handwritten note has become almost a lost art. We have become accustomed to emails, texts and “likes” on a 24/7 basis, but to receive something written by hand – it does something to us. We pause, hold it, touch it and look it over and think to ourselves “wow, that was nice of them to take the time to do that.” Sometimes we even save it out for a few days on our desk in admiration of the effort it took to find a pen, the notecard, write the note, find a stamp, address the envelope and find a mailbox (not to mention licking the disgusting envelope). While it is a “little thing,” it actually makes a big statement because it is rarely done anymore.

4.  To create new habits of gratitude which can change your brain for the good!

As reported in Inc.com by Jessica Stillman, a fascinating recent study from Indiana University showed this when they studied 43 individuals suffering from anxiety and depression – half of them were assigned a gratitude exercise involving them writing simple thank you notes to people in their lives. Two weeks later, they showed more gratefulness than the other group but even more importantly, when a brain scan was done three months later, this same group showed a significantly higher gratitude-related brain activity than the others. According to this article, it "suggests that the more practice you give your brain at feeling and expressing gratitude, the more it adapts to this mindset -- you could even think of your brain as having a sort of gratitude 'muscle' that can be exercised and strengthened... the more of an effort you make to feel gratitude one day, the more the feeling will come to you spontaneously in the future."  And, to think this all was discovered by writing simple thank you notes!

5.  To follow in the footsteps of successful business and world leaders.

When George HW Bush was asked in 1992 what one thing has helped make him successful in life, he responded with his habit of writing thank you notes. He wrote them to world leaders, politicians, and celebrities, but he also wrote thank you notes to everyday people. Another example - from 2001 to 2011, Douglas Conant, CEO,  transformed Campbell Soup. In addition to cutting costs, innovating brands and increasing marketing efforts, one of the other things he did was write thank you notes – 30,000 of them - to all the employees at all levels. He carved out an hour every day and it paid off. When speaking to Harvard Business School on a case study, he admitted that his culture was toxic and lacking employee engagement but after many new initiatives, and a culture of praise for what was right (i.e. thank you notes from the CEO), the culture was transformed to a highly engaged employee culture, one Gallup labeled as “World Class” in 2010. And, more recently, Mark Zuckerberg, founder and CEO of Facebook,  admitted to having a problem with a critical nature – always finding what was wrong in people and issues. So in 2014 decided to write a thank you note (or email) every day for a year as a personal challenge. What he discovered was that he was the one who changed – he became more grateful for the good things people were doing instead of focusing on what was wrong. These leaders have demonstrated for us the power of a simple note of gratitude.

Hopefully, these five reasons for getting out that pen and paper can motivate you to make this act of writing a grateful note something to do in your business practice and not just for an annual birthday gift. And, if you need one more reason?

Because our moms would be proud.  And, don’t we all just want to please our moms at heart?

If you need some help figuring out your next step professionally, consider working with Connectivity.  As a career consultant, my specialty is helping you figure out where you want to go and then bridge the gap with the right set of tools to help you get to your next opportunity. Contact Camille at Camille@connectivity.cc and let me know how I can help you.  For more on my background and services, see www.Connectivity.cc

7 Common Challenges and Tips for Executives in Transition
Three Reasons to Consider the Enneagram in a Career Exploration
What Do You Want to be When You Grow Up?